You are here: Home / Fish and Lake Maintenance / Goose Management

Why does Indian Lake have so many Canada geese in recent years?  It was a much different situation a century ago.  In the early twentieth century, very few breeding pairs of Canada geese could be found in Michigan or surrounding states.  Over hunting, collection of eggs, and habitat alteration conspired to extirpate Canada geese from much of their traditional home range in the Midwest.  With a dearth of local breeding pairs, most geese seen were migrants passing through in the spring and fall.

This situation promoted an effort by federal and state resource agencies and private individuals and groups to restore resident goose populations in these areas.  Resident populations would also create hunting opportunities for local economies.  As early as 1930, the Michigan Conservation Department had developed a breeding flock for small scale releases.  These efforts received a boost with the discovery of a flock of the maxima subspecies in southeastern Minnesota in 1962.  Geese from this flock were used to start a breeding program at the Northern Prairie Wildlife Resource Center.  These geese seemed to be ideal.  They were successful breeders, they were nonmigratory and would remain in the area, and they were large enough to be preferred targets for hunters.  By 1970, Michigan reported having 9000 Canada geese.  Today, the population has exceeded 300,000 with 80% concentrated in the southern third of the state.

The Canada goose restoration efforts across the United States are a good example of success producing unintended consequences.  As Canada geese have proliferated, they have produced goose/human conflicts.  They foul lawns, beaches, and walkways with fecal matter, add fecal coliform bacteria to water contributing to beach closings, add nutrients to water contributing to algal blooms, and can be aggressive when nests are approached.  They can do considerable damage to grain crops in the spring as the plants emerge from the soil.

Canada geese are protected under the federal Migratory Bird Treaty Act.  Consequently, they can be hunted by license only during mandated seasons.  It is illegal to disturb nesting geese or to harass them with firecrackers or motorized devices.  In response to user conflicts, the U.S. Department of Agriculture in conjunction with the Michigan DNR has two programs available for mitigating problems that arise – goose roundups and a nest/egg destruction program.

The first goose roundup on Indian Lake was in June, 2017.  This and subsequent roundups have removed 32 to 44 geese per year.  The cost of the initial roundups has been $700-$900 per year and was funded from donations from LSA members.  LSA did not participate in a nest/egg destruction program as it is believed that many of the geese nest in the nearby wetland and then move to the lake to raise their goslings.

In 2020, the goose roundup for Indian Lake was cancelled.  The governor ordered state agencies to reduce expenses and the goose control program was cancelled for all but a few essential locations.  There will be a goose roundup in 2021.  LSA has also been informed that participation in a roundup in 2022 will also require participation in the nest/egg destruction program.

The goose roundups have been successful due to the help of many volunteers to assist our contractor.  Many thanks. 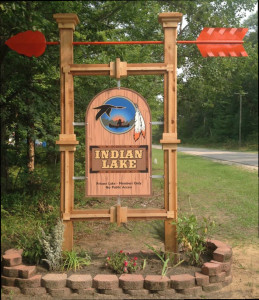